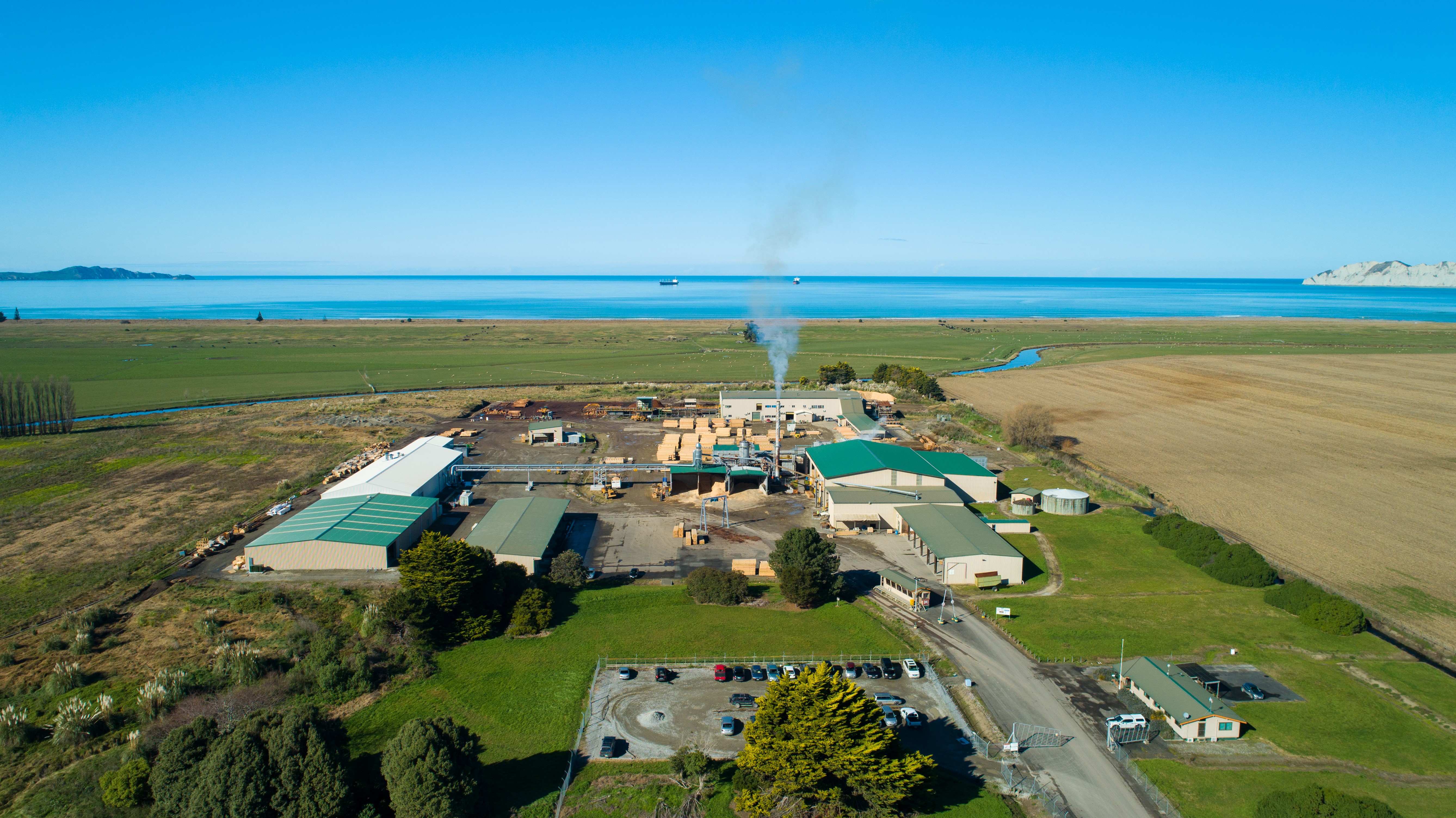 A Scion report indicates wood processing in Tairāwhiti could more than half greenhouse gas emissions.

Wood processing in Tairāwhiti instead of China could more than half greenhouse gas emissions, reveals a ground-breaking Scion report.

Trust Tairāwhiti has invested in the Prime Wood Cluster Centre of Excellence since 2015, transforming the abandoned plant into a fully operational sawmill.
Under the Tairāwhiti Economic Action Plan (TEAP) sector action ‘Growing Wood Processing Locally’, the cluster continues to deliver on its job creation targets.
However, its environmental impacts have been unclear. Trust Tairāwhiti TEAP Programme Manager Harley Dibble queried how the cluster stacked up against the TEAP’s promise to protect and enhance the environment, alongside its commitment to moving the region towards a zero emissions and circular economy.

The result was a Scion report commissioned by Trust Tairāwhiti Wood Processing Commercial Development Manager Dr Mark Smith. The report showed that processing logs in-region and then shipping them to the Chinese market, instead of shipping raw logs to be processed in China, could more than half greenhouse gas emissions. Products investigated were sawn lumber, LVL, plywood, particle board, OSB, and MDF.
The reduction in emissions ranged from 37.5 percent for sawn lumber to 50.1 percent for particle board.
“The fact that the reduction in greenhouse gas emissions is so significant, just acts as another driver to encourage wood processing,” says Dr Smith.
“The TEAP poses an important question, and now we know without a doubt, that wood processing in-region is not detrimental or a barrier, it’s actually a key driver for sustainability success.”

The two main contributors to the reduction in emissions were electricity generation and the high moisture content of logs.
This is because New Zealand uses more sustainable sources like hydro and geothermal power versus China’s predominantly coal-powered generation systems.
When it comes to moisture content, the average log sits at 58 percent, while the average finished wood product is just 12 percent.
“It comes down to less water to ship and cleaner energy,” says Dr Smith.
“In a nutshell, the report tells us what a lot of other countries have already figured out, that processing in-region is a value-add.
All over the world, primary industries are processing more home-grown logs on home soil.”

The statistics speak for themselves.
The top 10 countries that harvest the most softwood logs each year are USA, Russia, Canada, Sweden, Finland, Brazil, Germany, New Zealand, Poland and Chile.
New Zealand exports 59 percent of its raw log harvest, with the other nine countries exporting significantly less, (each less than 14 percent).
Furthermore, in New Zealand, Tairāwhiti captures even less value.
The region exports over 90 percent of its harvest, nearly three million cubic metres of raw logs per annum, with no further value or jobs created.
Like many industries, forestry was hit hard when COVID-19 took hold earlier this year.
Trust Tairāwhiti General Manager Commercial Richard Searle says, diversifying can only increase resilience in a post-COVID economy.
“Forestry is a pillar of our community, so to prove that wood processing in Tairāwhiti is better for the regional economy and for the environment, is a huge positive.”

The Scion report ‘Comparing greenhouse gas emissions of onshore and offshore log processing; Gisborne, New Zealand versus China’, was peer-reviewed by the Ministry for Primary Industries and is now available HERE

A credible long-term greenhouse gas emissions reduction target is an important part of ensuring that New Zealand can make a smooth transition  to a low-emissions future.

The 2030 target is part of New Zealand’s commitment to the Paris Agreement, which aims to limit the global temperature increase to 1.5 to 2°C above pre-industrial levels in this century.

In 2019, the Climate Change Response (Zero Carbon) Amendment Act set into law a new domestic 2050 target, to net zero emissions of all greenhouse gases other than biogenic methane by 2050.