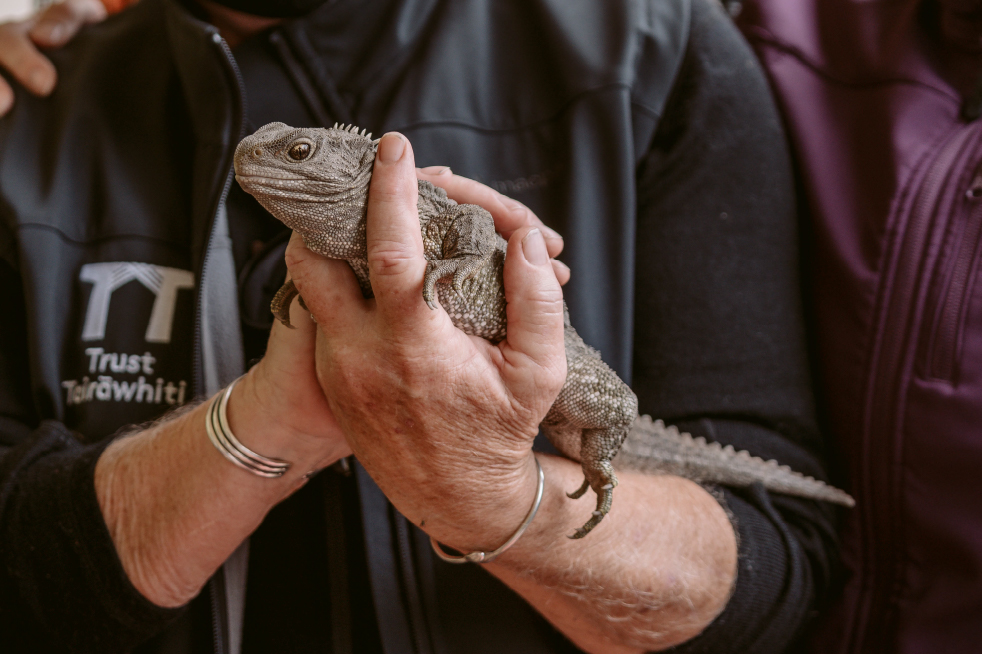 An ancient line of living fossils will be able to continue thanks to the work of ecologist Steve Sawyer and the Whinray Ecological Charitable Trust.

The Rhynchocephalian reptile – a spiritual tuatara species associated with myths and legends – has been around for more than 250 million years. However, they were all but wiped out around 500 years ago. Five of the taonga were gifted by Ngāti Koata and transported from Isaacs Conservation Trust in Christchurch to Motu in November and are now living happily behind the predator-free enclosure. Trust Tairāwhiti contributed $10,000 to the project, which has been eight years in the making.

The Motu Taonga Tuatara Project is a joint initiative between the Ecological Trust and Te Aitanga a Māhaki iwi to support the transportation from the South Island of tuatara, that have scientific whakapapa lineage, to Te Tairāwhiti.

“It has been eight long years just to bring these tuatara back to Tairāwhiti,” says Steve Sawyer. “Whinray Trust first had to get a DOC permit for the tuatara, raising $120,000 for fencing, and has worked alongside hapū partners to make sure everyone was a part of the project design and in getting it signed off before the transfer. All work has to get peer-reviewed by DOC recovery groups, so it takes a long time.”

Most of the work on the enclosure at Motu, which used to be just a bare paddock, has come from voluntary labour and has included planting around 7000 trees in an area that is now home to both kiwi and tuatara.

Matawai Chairperson Joanna Barbarich says, “the marae continues to have a very close relationship with the tuatara programme and wider biodiversity projects, including the Māhaki Mahinga Kai restoration team who are continuing the mahi and strengthening the relationship with Whinray Trust.”

Tuatara were once widespread in Aotearoa, numbering in the millions until people and pests – mostly rats – decimated the population around 550 years ago.

The five new residents seem happy in their new burrows. The key to the move was shifting at the beginning of summer, giving them a whole season to establish and dig their own burrows before winter hit. In the colder months, they go into a hibernation state called torpor. They lie with their eyes closed for four months and stay still until the soil temperature warms up when they start coming back to life to feed.

Steve says the new residents can be found wandering around the enclosure at night, dining on the food available in the regenerated area, which is now filled with invertebrates, insects, fungi and things like mycelium, all of which help create an environment that is friendly for species like tuatara.

“The Trust Tairāwhiti support was a huge help and enabled this project to be a true success for species conservation and all of the community members involved,” says Steve.