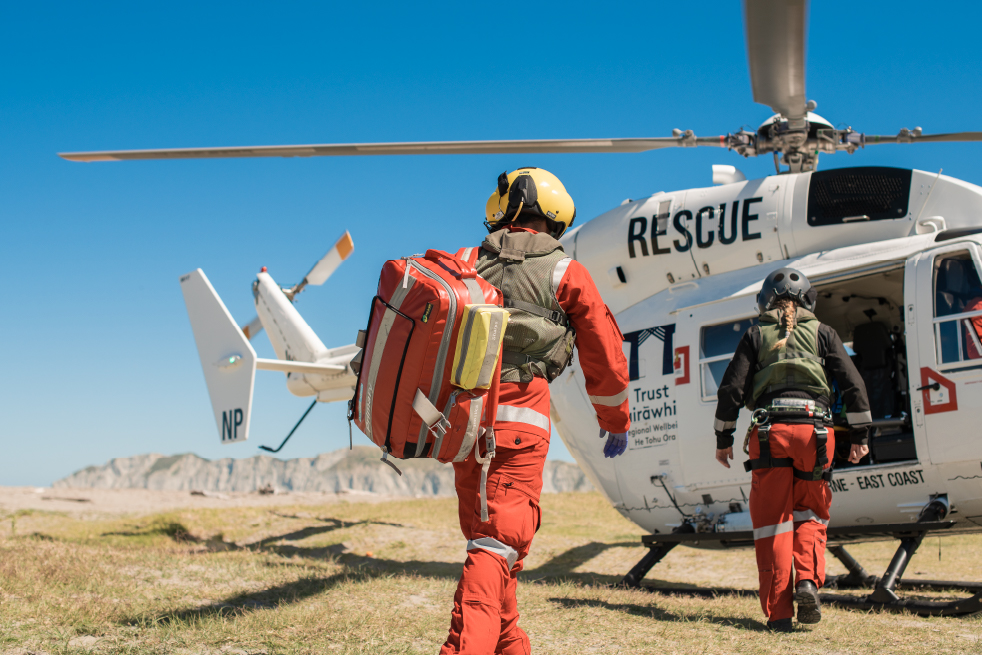 When the weather is at its worst, it’s likely the Eastland Helicopter Rescue crew will get the call-up to help, but it is thanks to Trust Tairawhiti support over the last five years, that the region has this valuable service.

Eastland Helicopter Rescue Trust (EHRT) chair Patrick Willock says they simply couldn’t operate without that financial help. In 2017, the Trust committed to $350,000 a year for five years to support their operations.

“There is no way we could raise the amount we need to be able to operate,” says Patrick. The money has been used in all sorts of ways, including to purchase the best in technology and equipment, enabling them to make a world of difference. “We have a new stretcher, spent $25,000 on an ultrasound, $53,000 on a combined defibrillator and ventilator, and also bought a fluid warmer and syringe driver for intravenous injections, among other things. The investment by Trust Tairāwhiti has allowed us to continue to improve what we have.”

A winch helps for forestry incidents or remote access locations when it is not possible to land near the patient. The terrain, weather and remoteness of the region mean the Tairāwhiti crew are often flying in the most hostile environment of anywhere in the North Island.

The service has grown to now have three full-time pilots, three paramedics and three crew members who all work on a revolving roster of working, being on stand-by, or days off.
There is always a crew of three ready to go, thanks to accommodation at the Gisborne Airport base. They are contracted to be airborne within 10 minutes of being tasked for a job in daylight hours and 20 minutes at night.

“We operate with a fundraising base of around 45,000 people in arguably the lowest socio-economic community in New Zealand. It is critical we are able to run a service to support our more isolated living residents to get the kind of medical assistance when they need it,” he says.

In the year ended March 2022, the Trust Tairāwhiti Eastland Helicopter Rescue flew 234 missions, with most being emergency call-outs but also including police and rescue coordination centre assistance. While 63.5 percent of their work is done north of Tolaga Bay, their turf also covers the Mahia Peninsula, across to Waikaremoana, through to Ōpōtiki and back around the coast to Gisborne.

Patients are usually brought back to Gisborne Hospital, but depending on the need, some are taken directly Waikato Hospital, which has been helped thanks to the addition of a bigger twin-engine helicopter.

If the helicopter is activated through the right channels, there is no cost to those being transported, thanks to funding from the Ministry of Health and ACC. “People do worry about getting a bill, but that’s not the case,” said Patrick. Te Rūnanga ō Ngāti Porou also assist in providing $5000 in fuel cards so whānau can drive to meet the patient and get home again. “It is little things like that, that make a huge difference for families.”

Patrick says the region needs to have the same level of service as other districts, and it is a constant battle keeping government officials aware of the isolation and lack of qualified medical services in the rural communities. “People don’t realise the isolation of our district,” he says. “Once you fly past the hospital at night, there are no lights.”

The pilots often rely on their military-grade night vision goggles for those flights. Another challenge is the lack of fuel, which can limit how far the helicopter can travel for search and rescue missions. They carry 400kg of fuel, which allows them to get around the Coast and to Whakatāne.

“The Trust Tairāwhiti support allows us to help our most isolated communities, and I can’t say enough as to just how important that is for everyone.”